I have just finished reading a book called The Happiness Equation, by Neil Pasricha: 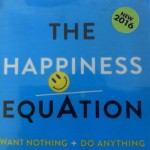 The Happiness Equation by Neil Pasricha

One of the chapters that struck me for our clients is the idea of ‘never retire’ (for those of you that want to pick this up at the library, as I did – its Chapter 4: The Dream We All Have Is Completely Wrong). I have put the phrase ‘Never Retire’ in quotation because he doesn’t mean retiring from a job per se. I will now explain.

We advise plenty of people about what to do with their money when they ‘retire’. Most of our clients, and us as well, don’t like this term – it implies a sort of giving up on life. Pasricha points out that in 1889, Otto von Bismarck instituted the first Age Pension from age 65. Then the average life span was 67 – so the German state was up for a two year commitment, on average.

This set the benchmark and age 65 was the time for retirement from then on. Though here in Australia it is now 67 for us ‘youngsters’ born from 1 January 1957.

Anyway this means that if you ‘retire’ at age 65, you’re looking at around 20 years or more of golf, gardening and loads of TV. Sound boring? Not that I have anything against any of these things – but life can lose meaning for some – you can only play so much golf (though don’t tell that to our friend who just played 100 days of golf across the UK – different courses!)

Pasricha talks about the people of Okinawa, who are amongst the longest lived in the world. They have a concept called ikagai – which means your purpose, or roughly ‘the reason you get up in the morning’. Interestingly they don’t have a word for retirement, says the author. For example there is a 102 year old karate master in Okinawa whose ikagai is to carry forth his martial art.

1) It is a new idea
2) It is a western concept
3) Retirement is a broken concept.

Pulitzer Prize winner and Nixon speechwriter William Safire kept writing his New York Times column until he was 75. After that he stopped his daily piece but kept writing his Sunday column until he died in 2009. In 2005 he wrote he wrote about how we should all plan for not just our social security, but also for our social activity. ‘When you’re through changing, you’re through’.

Safire: ‘Never retire, but plan to change your career to keep your synapses snapping… Readers, too, may want to think about a longevity strategy’.

When you stop work, you can lose Social, Structure, Stimulation and Story. But if you look to your ikagai, you can keep them. ‘Just keep learning, changing and growing’.