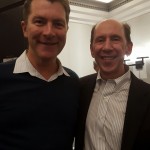 Recently I was asked to submit an article to Money Magazine on what should one do with an extra $200 per week for five years. My focus was on Retiring Well. This is my response below – which you can read now, unedited!

The pre-eminent savings vehicle for retirement in Australia is superannuation. However, there are now more limited caps on how much you can contribute to super. For example, the concessional (you can think of it as pre-tax) cap is now limited to $25,000 per annum for all from 1 July 2017.

I now encourage even younger clients to consider salary sacrificing to super earlier rather than later. It is now harder to ‘catch up’ with later contributions to super – another limit is that non-concessional (post tax) contributions will be limited to $100,000 per annum from 1 July.

Yes, it may take a little longer to pay off your home loan – but the tax benefits in super will outweigh that. Also there is a real chance that many Australians simply won’t have enough to retire on if they focus too much on their home loan and not enough on super growth.
Our taxation system and the benefit of leverage from borrowing to invest in an investment property mean that many Australians (including me) have benefited from the growth in Australian residential real estate. But new investors need to be aware that negative gearing could well be removed by a new government, and this could affect your property’s value, at least in the short run.

Growth assets, like shares should be part of most Australian’s portfolios. One of the great risks for clients is living too long – longevity risk – and if you don’t have enough growth assets, your retirement wealth my run out before you do. This goes for monies held within super as well as outside super. When you’re about to retire, your time frame should not be the two or three years to retirement but the next 20 or so years that you or your spouse will be living.

So where are we going to put your extra $200 per week? We believe in Evidence Based Investing. And that has led us to an investment company called Dimensional Fund Advisors (‘DFA’). Originating in the US, but in Australia now for many years, DFA base themselves on academic research. Indeed their advisory board had been chock full of Noble Laureates (in economics, of course!).

When I got my Master of Applied Finance in 1993, the core of our studies was based on the work of these academics. People like Eugene Fama and Ken French – here’s a photo of me with Ken, at a recent DFA conference:

This has led to excellent returns over time – both in shares but also in bonds. DFA don’t pick stocks per se though – if a share meets their criteria, they will simply pick the cheapest one on the day – or wait till a stock that meets their needs becomes available at a better price.
In order to invest with DFA, you will need to find a DFA adviser – DFA understand the benefits that good advice can add for an investor. By the same token, they are picky about the Advisors they work with. For example, they have never worked with Advisors who charge commissions on their investments. Advisors need to be trained at DFA seminars before they are allowed to use the DFA products.

If you have a ‘balanced’ risk profile, you might be invested in the World Allocation 70/30 Trust (i.e. 70% in growth assets, and 30% in defensive assets). As at the end of February, it averaged a return of 10.57% per annum (before tax) over the last five years. However we will use a more conservative assumption – a return of 7.63% because that is the return we would assume for a Balanced investment over time, and that the 5-year return doesn’t include the GFC. Assuming this return was replicated in the next five years (we would be more conservative with an actual client about the future return), this would mean that your $200 could accrue to $63,055 (assuming an average return of 7.63% and no tax. There are 260 periods in my graph – 52 weeks for 5 years): 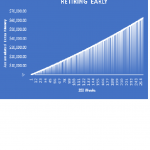 Revving Up Your Returns
If you love risk and have a longer term framework, you might be interested in an internally geared fund. By that we mean the fund borrows a proportion of itself – so it magnifies returns (but also losses!). One example (in super) is MLC’s Horizon 7 Accelerated Growth Portfolio – it borrows up to 30% of its value. Over the last seven years, it has earned 10.5% per annum – versus 8.9% in its non-leveraged brother, Horizon 6 Share Portfolio.

However, the 10 years returns (which include the GFC) are reversed – 4.1% and 4.7% respectively. Still feeling frisky?

One possibility is using an investment bond. These instruments are taxed normally at the company tax rate (currently 30%) – but the effective rate can be lower thanks to things like franking credits.

Speaking of franking or imputation credits (where the government gives you a credit for the Australian income tax a company has paid) – these can make a big difference to a retired investor – so have your adviser look at that option too. The only problem with that is you will be limited to Australian shares – and our market is dominated by the banks, BHP and Telstra. No exposure to Facebook or Apple there.

If you decide to sell an investment property, consider doing it in your first full financial year of retirement. This will limit your taxable income – and you may be able to offset the capital gains tax liability with an unsupported contribution to super.
As always seek advice from properly qualified tax and financial Advisors before acting – they’ll save you money in many cases.