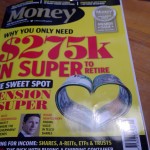 Recently we helped out with the latest Money Magazine cover story.  We looked into the effect of the new asset test rules on how much money one will need to live on.   Here is the original information that our technical chap, Peter Kelly of Centrepoint, came up with:

“I have found the ‘sweet spot’ in terms of maximised income that is supported by the age pension.

Based on this scenario the full age pension starts to reduce (under the income test) when super sits at $260,000 (total combined income $47,969).

However, the optimal income they generate occurs when the super balance is $329,000. At this level, their combined total income is $50,299.

From there on, the income progressively increases as the super balance rises.

In all, when looking at this scenario, the optimal level of income is achieved when the super balance is around $329,000. The income breakdown at that point in time is:

A couple in the same circumstances as this example, are actually worse off in income terms if they have between ~$450,000 and ~$950,000 in super. They can generate more income by having significantly less in super! Ideally a couple need to have less than $400,000 in super, or more than $950,000. Very disturbing. Of course we are assuming that they are only drawing the 5% minimum from their account based pension.

That is right, if diligently only drawing the minimum from their ABP, they will need to have $956,384 in super to self-fund the same level of income that can be derived with a modest account based pension and the full age pension.

Of course, the benefit of having more in super is, it delivers choice. That is, if they need extra money for anything, they have it available. But that choice requires a big trade-off.

If you wanted to add another twist to the scenario, let’s assume our couple both do little part-time work that pays them $6,500 each, per annum. Assume they qualify for the work bonus. The figures now look like this:

This is just a little disturbing!”

As I said to Money Magazine, it pays to be very poor or to be very rich.  Graphing the original data we saw that there is a trough in between where it hurts people who have gone that little bit extra to save more.

Super is still a great place to save for retirement though.  As I also state in the article, I encourage almost all workers to start salary sacrificing to super sooner – because the new lower concessional contribution cap of $25,000 going to make it very difficult to catch up later.  This is the case even if you have a mortgage – try to start early and often.