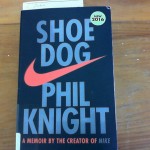 Over Christmas I read a memoir by Phil Knight, the founder of Nike. It is a great read – I had trouble putting it down. My Dad is reading it now, and enjoying it as well. Here’s the five things I learned from it:
1) Learn to take risks when you’re young. After leaving the army and then business school, Mr Knight travelled the world and then went to Japan in 1962 – and started importing shoes – at a time when WWII was still fresh in many people’s minds.

2) Be prepared to hire different sorts of people. Most of his first core staff weren’t typical ‘jocks’. In fact several were obese, one was wheelchair bound and one had a drinking problem. But they were all from Oregon, his home state, and had great commitment.

3) When starting a business, be patient. Phil worked for a long time as an accountant, and then as an accounting lecturer, before going full time with his business.

4) When circumstances change, change your approach. When it became clear that the Japanese company that he was importing shoes from were going to abandon him, he started developing his own brand (‘Nike’ – the name, the goddess of victory, came from a dream one of his first staff had).

5) Look after your family. His big regret was not spending enough time with his boys. When Nike brought out a line for children, his oldest son refused to wear Nike – because it was keeping him away from them for too long.

What’s been your biggest learning from a business book?