Recently we moved home. Here is our first bill: 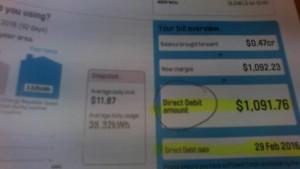 $1,091 is a lot of money for two people and a small dog. In our defence, it was for four months, not three. We are now in an apartment, and so we only have electricity, not gas. The apartment has a very large electric hot water system. But we were running the air conditioning way too much. So we have cut back on that (and use fans a lot more). And the unit came with two wine fridges – we have turned one of them off.

We are planning on getting better curtains to help regulate the temperatures in our new home.

It was reported in 2012 (The Advertiser) that South Australia has the most expensive electricity in the world. And Google tells us that Australia has the fourth most expensive electricity in the world (after Denmark, Germany and Spain). This reflects the cost of renewable energy and also the increasing cost of our poles and wires (some say the latter has been ‘gold plated’).

With all this in mind, my attention turned to seeing if I could get a better deal with an electricity supplier. Our initial supplier was AGL. They had been the gas supplier for our old place. We also had been using Dodo for electricity at our last home. So I called AGL and asked if they could match the Dodo rate (which said 25% off usage costs, if you pay on time). I rang AGL and we went through the rates together – hoping they would match the price, and saving me the hassle of moving. But when we went through the rates, we realised that I would not actually be saving (despite the discount with AGL being 14%).

Returning to this later I realised that I had forgotten to factor in the 25% discount (I think). But also I now realise that all of these energy companies are quoting off different base rates. So a 14% discount with one supplier could actually be lower than than a 20% discount with another (but dearer) supplier. Also we are heavy users and AGL has a much higher rate on its second step up – it might be cheaper for a low user.

I like to think I know something about money. But I was getting bamboozled by the sheer complexity of the energy market offerings. So my next step was the federal government’s comparison website – www.energymadeeasy.com.au. They don’t have any conflicts, so surely they could tell me who to go with – right? 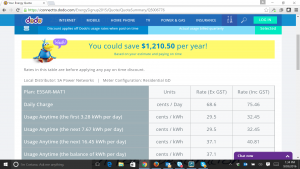 Energy Made Easy – Not Really 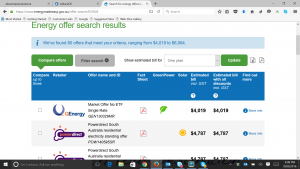 This site was a bit useful – but it appeared not to allow for any special offers or discounts, or indeed for different rates at different times in my current usage. So I then decided to try a commercial comparison site – in this case iSelect.

This site was somewhat better. I had to give up my phone number though. Almost immediately I got a phone call from a skilled and helpful Sophie – who convinced me to move to PowerDirect. Ironically this company (she told me) is a subsidiary of AGL, my current supplier. I would have saved about $61 on my first bill – a saving worth having, I thought. I have also got contracts on both ends that don’t have exit fees. PowerDirect also ranked well on the Australian government site.

So, the lessons are 1) Shop around for electricity suppliers and 2) Take (sensible) steps to limit your energy consumption. The latter is what will make the bigger differences. Here is a photo of our new fan: 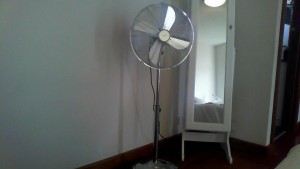