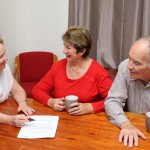 Getting The Age Pension for Farmers

One of our retired clients has been farming for the last 20 years. The asset value of their farm has meant that they have been ineligible for the Age Pension. However there is an exemption to the assets test called the Extended Land Use Test. The government has, for a long time, excluded from the assets test the family farm’s home and the 2 hectares around it. From 1 January 2007, the government also allowed farmers who had worked the farm for a 20 year period to be an additional exemption. It was clear that our client was eligible under this test. The problem was getting Centrelink to the table!

Our clients completed the requisite application forms. Never having been part of the Centrelink system, it was a major trial – for example one of their birth certificates was so old, it required special attention. We get our clients to complete a Centrelink form that allows us to get the correspondence that they are getting, and also to speak to Centrelink on their behalf. When the first assessment came through, it was clear that they weren’t getting assessed correctly.

They were only getting a partial payment, when they were eligible for the full payment.

So I rang Centrelink. My mistake was to ring the main information line. I raised the issue eventually, the issue was acknowledged. But then I was told the initial decision maker would have to change the assessment. After several weeks we saw that there had been a small change in the assessment. At this point I rang our go to expert on Centrelink, Mark Teale of Centrepoint. His advice – ring the local FIS (Financial Information Service) officer. Which I did. She rang me back shortly thereafter. She agreed with what I was saying. However she was not authorised to make the change (by the way these FIS officers are always good to deal with).

After leaving several messages over the following week, she called me. We now understood that the original assessor had only reduced the value of the property by $500,000, and not to a zero assessment. This was wrong. That person was about to go on holidays and appeared to be sitting on the decision. Her advice – your client may have to see their local member.

Our client went to their local Centrelink office the next day (they live in a rural location in another State). Their next planned visit was to their local Federal member. After explaining everything to the same Centrelink officer they had been speaking to earlier (not the original assessor), the Centrelink counter officer decided to apply the test correctly. Voila! Our client got the Age Pension, and also got the increase backdated to the original payment. Our client’s and we were elated.

We are sure there are many people who may have given up earlier. There may be farmers out there who are not aware of this exemption and not getting money they are entitled to. But this is the value of getting an adviser to assist you.

If you do have a serious issue with Centrelink, or a technical query, consider making a time to talk to an FIS officer. And make sure your adviser is helping you with Centrelink. They should be. And thanks to Mark!

2 Comments on “Getting The Age Pension for Farmers”